I’d argue that there’s as much to see underwater in La Paz, Mexico as there is above the surface. Named the “aquarium of the world” by Jacques Cousteau, the Sea of Cortez lies along the eastern shore of the Baja California, and the entire region is home to one third of the world’s marine mammals. 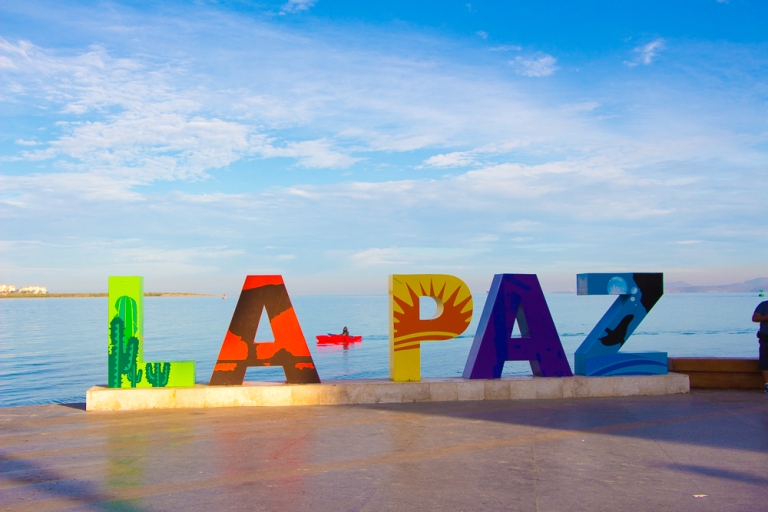 While perfect surf waves rush the shore most of the way down the Baja’s western edge, the east side is home to gentler waters, teeming with life. La Paz is situated approximately 2 hours north of the San Jose del Cabo Airport, a popular destination airport for visitors heading to Cabo San Lucas. A very well-maintained four-lane highway takes visitors north to Todos Santos, and eventually across to La Paz.

The city itself is home to around 250,000 people, its centre flanked by a 5 km long Malecon, the gateway to the Sea of Cortez and marine adventures. Arriving at the Hotel de la Catedral in the city’s centre,  I made my way up to its rooftop terrace, breathing in the warm, coastal air, my lungs feeling relief from Canada’s mid-winter windchill temperatures. Just then, the adjacent cathedral bells started tolling on the old, Mission-style church, a perfect welcome to this picturesque town.

The city itself has plenty of amenities, and restaurants to suit every palette, but fresh-caught seafood should not be missed. Feast on Mediterranean fare at Sorstis, or grab a picnic table seat for a more casual meal at Rancho Viejo, famous for its pastor tacos and its 24 hour a day restaurant service. Sample a cocktail from the bird-nest inspired bar design at Nim Restaurante, or try and make friends with the resident cat while tasting Mezcal at La Miserable Mezcalteria (the cat is the bar’s namesake – watch out for her quick swipes…Meow!). 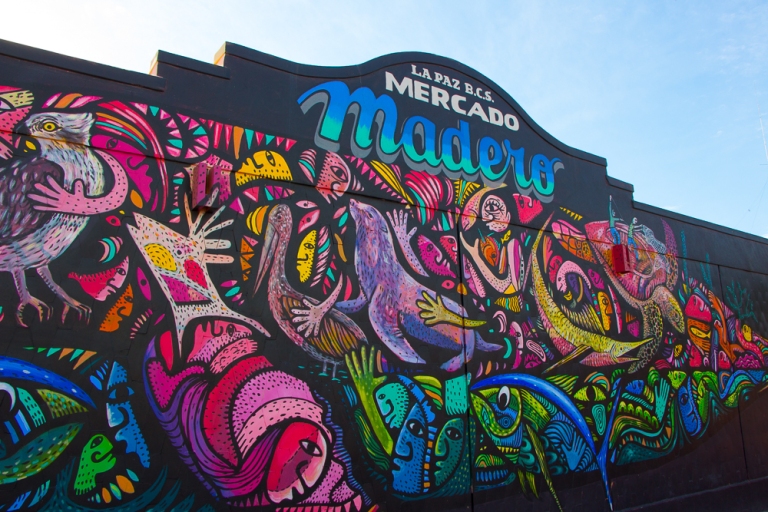 Take some time to wander the streets, where you’ll see dozens of colourful murals throughout town, many depicting scenes from La Paz’s history. Stop in for an Americano at Big Sur Coffee, and if you’re lucky enough to visit on market day, sample local fare and live like a local by visiting the farmer’s market near the Cathedral. 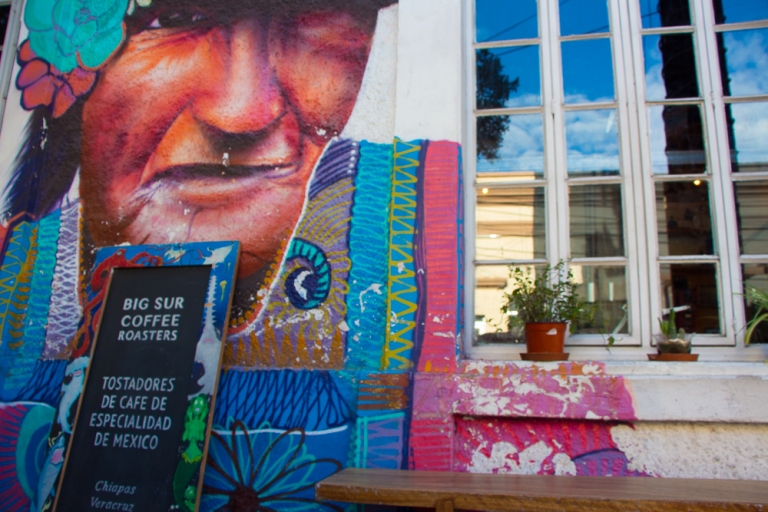 But it’s the water that draws many to this area. The next morning, we ventured by boat north out of La Paz to Isla Espiritu Santo, a UNESCtent O World Heritage Site and home to Camp Cecil, an eight tent “glamping” accommodation, located on a deserted beach. Each tent is just steps from the water, waves lapping close to the rugs that serve as your own front porch.

A main dining tent lets you eat al fresco with your feet in the sand, and a couple of couches give you a place to relax and talk about the day’s adventures. 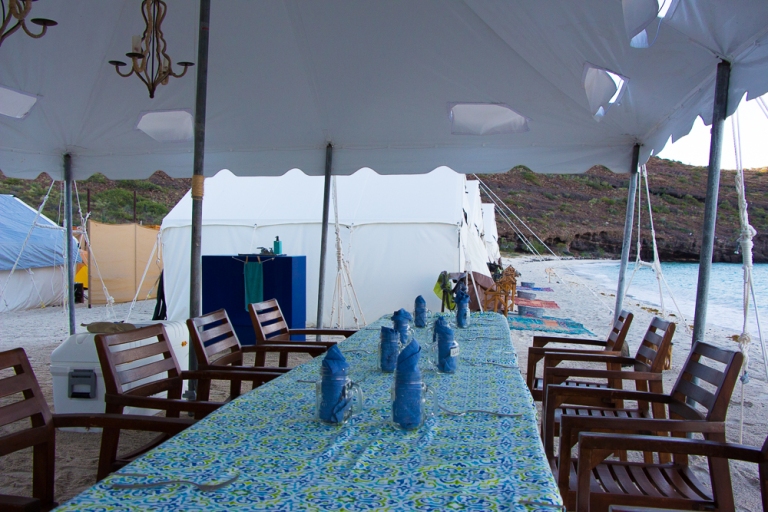 The Camp Cecil team make you feel like family from the moment you step off the boat, and their culinary team create thoughtful and innovative dishes, often featuring the day’s local catch, hand delivered by two local fisherman brothers, ages 84 and 91, respectively. 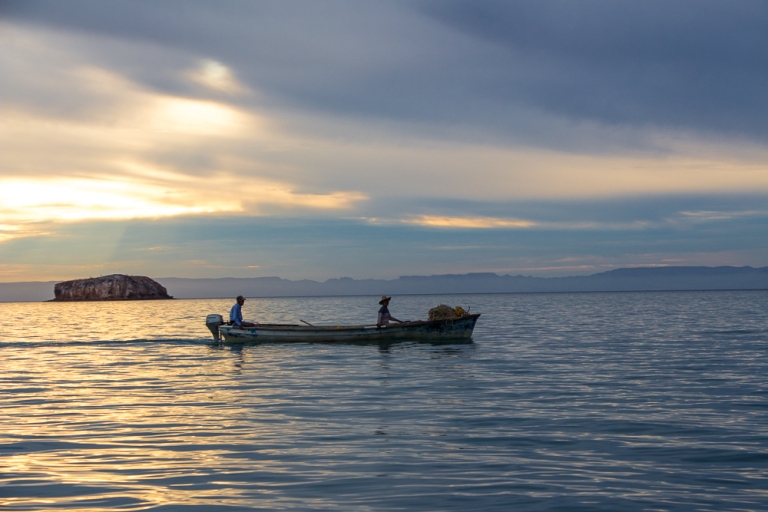 Camp Cecil is a perfect launch pad for paddle boarding, kayaking, hiking on the island, or visiting a local sea lion colony, where you can don a snorkel and mask and swim with these friendly creatures in their natural habitat.

The sea lion colony is carefully monitored and all visitors must gain permission and wear a wristband, to help ensure the welfare of the animals.

Overhead, you’ll see herons, pelicans, vultures and even eagles, and at night, Camp Cecil is often visited by a local Babisuri (ring-tailed cat), a raccoon-meets-cat-meets-possum creature that investigates camp after dusk (keep your tent screen zipped up to avoid a surprise visit).

Camp Cecil lets you disconnect from your daily obligations and reconnect with nature. Everything is outside or tented, down to the compost toilets and solar-powered showers. After a quick tutorial, you’ll feel as comfortable as being at home.

The interior of each tent, is appointed with touches of comfort, from the large, comfortable bed, to fresh towels, lanterns, candles and books.

Closer to La Paz, the bay is home to the largest fish of all – the whale shark. Often measuring 10 metres, the spotted whale sharks can look intimidating, with their gaping Dyson-vacuum mouths and large dorsal fin. But these friendly giants are only interested in eating plankton, and often let humans swim alongside them as they gracefully weave their way through the water. 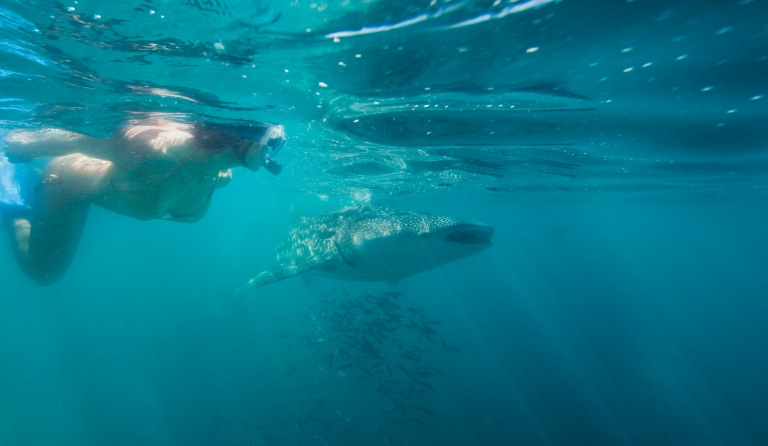 It’s jumping in the water for the first time with a shark that will likely intimidate you. Wetsuit, snorkel, mask and flippers on, I hung my legs over the edge of the boat, awaiting directions from our guide.

“When I say go, jump in the water!” she said, her eyes fixed on the large shadow just below the surface, headed our way. For most, leaping towards a 10 metre long fish would go against our deepest instincts, but as the creature peacefully went by, I took a deep breath, put my face in the water, and started kicking to keep up.

Within a moment, I felt my breath grow deep, a near meditative state, as I watched in awe as the whale shark effortlessly navigated the blue waters. After a few minutes, we resurfaced, ready to rest on the boat, speechless from our otherworldly encounter.

The southern Baja is also home to grey whales, who mate, give birth and raise their young in the shelter waters of Magdalena Bay, a 120 km long lagoon on the Pacific coast. Located approximately 3 hours from La Paz (a full day trip offered by Maar Adventures), you’ll pass through varied countryside, eventually reaching the Pacific coast.

With just a few other guests in a small fishing boat, the quiet of the lagoon is soon interrupted by blasts of water vapour and the sleek surface of the grey whales as they come to the surface to breathe. We saw at least a dozen that day, with some even breaching within feet of our boat.

La Paz has concerted efforts to reduce its use of plastic in the city, likely inspired by the pristine waters and jaw-dropping marine life that must be protected in order to be enjoyed for centuries to come.

Quite simply, it’s the perfect Mexican destination if you’re looking for an authentic city filled with friendly people who have a passion for the sea and the creatures who call it home. From turquoise waters to cactus-filled fields to deserted island beaches and adventures galore, La Paz will swim into your heart. 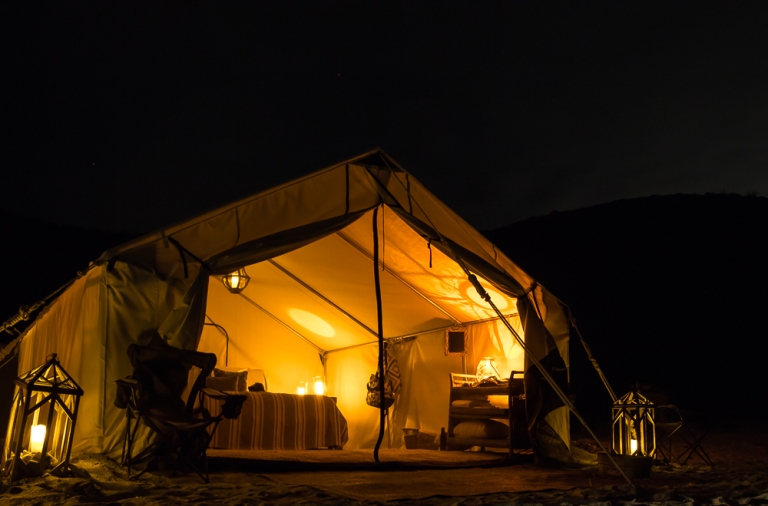 My Tweets
Use the search box below to find a particular post or place I've written about: