“You want us to crawl in THERE?” I pointed to the small hole into the ground that our guide was casually trying to cover up as we hiked among the branches and moss deep in the county of Fermanagh in Northern Ireland.

The hole he was covering was something you could accidentally trip upon, which would be hazardous enough, let along willingly wedge your entire body into it, before going another 180 feet or so below the Earth’s surface into the Marble Arch caves.

Our guide smiled and said with his nice Irish accent, “It’s not as bad as it looks.”

Am I courageous? No way. I blame good old-fashioned Irish friendliness.

You see, the Irish are just SO nice (this coming from a Canadian), that you’d never want to feel that you are letting them down.

So whether it’s clambering up a 90 degree rock cliff or crawling into the Earth’s core, here’s how I adventured up, down, above, below and through Northern Ireland.

Our first stop was Newcastle, roughly 90 minutes north of Dublin. After a quick check-in at the Slieve Donard Hotel, with stunning views of the sea and a Downton Abbey-esque charm, we headed into the hills – which are among the tallest in Northern Ireland.

Hiking here leads you past century-old shelters, into pastures with friendly ponies, and along ancient rock walls, all with sweeping views of the mountains and the ocean. We headed to nearby Castlewellan and tested out e-bikes – they provide a pedal assist on the hills, before you zoom down past beautiful tree groves and castles.

Northern Ireland’s lake and river systems provide plenty of opportunity to sight see from a canoe or kayak. 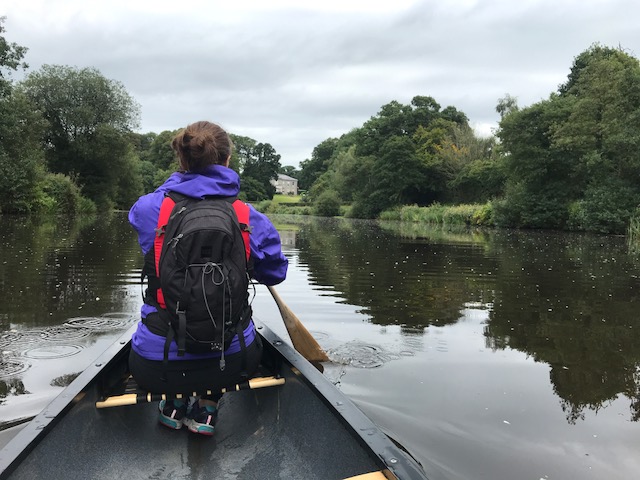 From Moy, we canoed along the River Blackwater to The Argory, a stately old mansion and woodland estate that is now part of Northern Ireland’s National Trust. Filled with art and artifacts and functioning  musical organ (odd for a private home), the interior, save for some eclectic art, has remained basically unchanged since the early 1900s.

One of the Manor rooms featured an armchair with a scale attached to it – legend has it that weekend guests used to be weighed upon arrival and departure. If they hadn’t put on weight during their visit, it was deemed a failure. Needless to say, feasts and hospitality are part of the norm of Irish culture.

Live in a Bubble

Finn Lough Resort in Fermanagh was a perfect forest hideaway and launchpad for exploring the region. The resort features a collection of transparent bubble domes, each one nestled in the forest, obscured from its neighbours.

Enjoy a 180-degree view of the trees and stars at night, taking the idea of “forest bathing” to the next level.

Each bubble dome is well equipped with coffee makers, a king-size bed (with electric blankets!), lights, flush toilet, shower, fridge and tea and cookies at the ready.

Quite simply, it’s “outdoor” camping at its finest.

Guests can enjoy locally-inspired cuisine in the restaurant, or get cozy in the “Snug” bar, which features a variety of craft gin cocktails mixed with fresh botanicals. 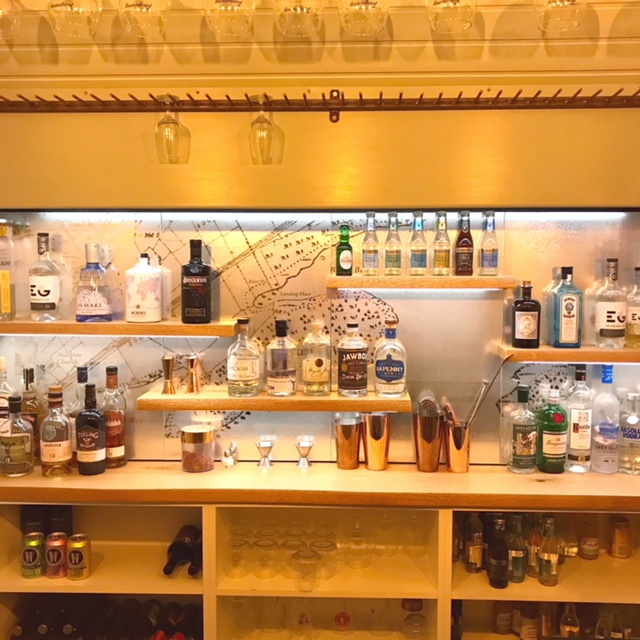 Curl up with a book or venture on the Elements Spa Trail, which features a designated forest circuit to different therapy buildings, including a float room, aromatherapy sauna, hot tub and cabin-inspired relaxation lounge. 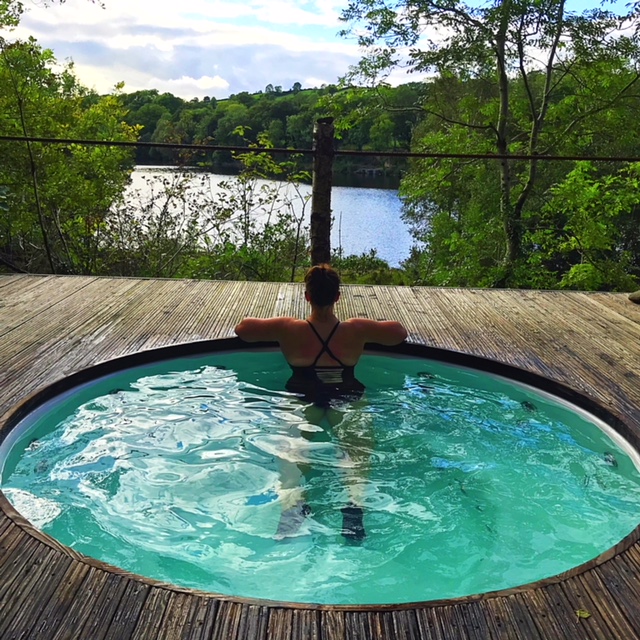 Put on your cozy robe and walk two minutes between each station along the forest trail, sinking deeper into relaxation with every step.

Back to the conversation about the caves. The Marble Arch Caves are among the largest in Northern Ireland, and while the main chambers can be accessed by a stairwell or short boat ride through the cave’s entrance, we opted for a “wilder” version – working our way down the narrow tunnels and chambers on foot (or stomach, or hands, as required), eventually emerging among the public platforms after a short rope rappel down.

I loved the physical challenge of trusting your grip and strength in the dark, and our guides made the process very easy, letting us know what to expect next and easing us through the tougher sections with confidence (and a smile, of course).

Heading north to the Derry and Portrush areas, we got speedy in our pursuits. We explored the historical city of Derry / Londonderry by longboard, after a quick lesson in the park by Far & Wild tours. 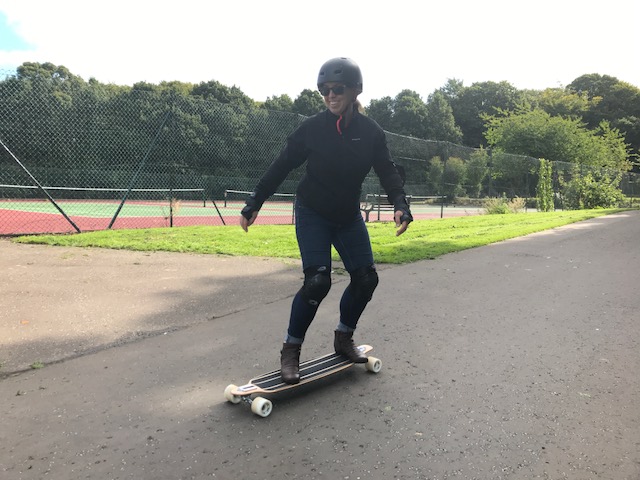 After gaining some confidence and balanced, we weaved our way through the city, taking in views of the medieval wall (still fully intact), Peace bridge and other historical areas.

The next morning, the skies turned blew and the winds picked up, making Benone Beach the perfect place to try blokarting – think of it as a go-kart powered by a sail, that skims across the sand at upwards of 60 km / hour! 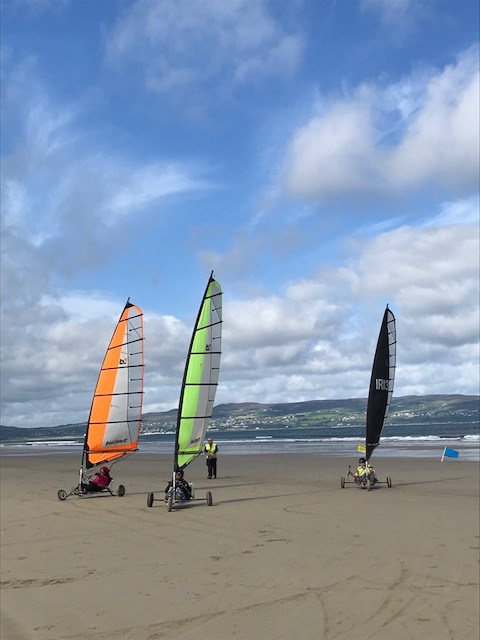 Heading further east, an onshore wind created some gentle waves perfect for surfing at West Strand Beach. While a dip in the North Atlantic may not sound appealing, the warmth of a wetsuit made the 2 hour surf session feel like 20 minutes. In true Irish form, we went from the beach to the pub, to sip on a refreshing pint of Guinness next to the fire at the Bushmills Inn. 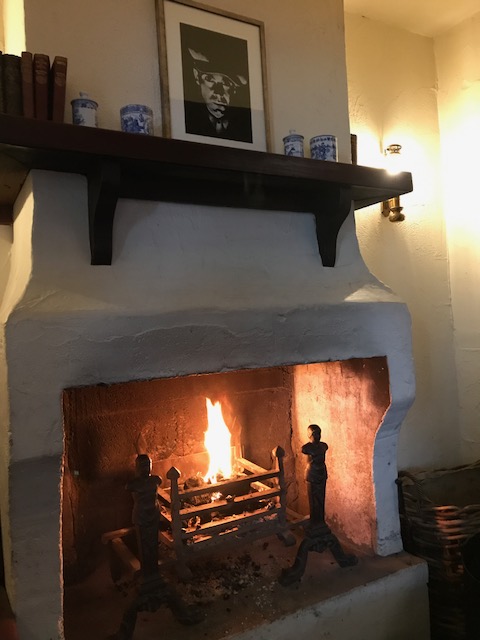 Crawling out of bed the next morning from the very cozy At The Beach wasn’t easy, but there was more to explore. 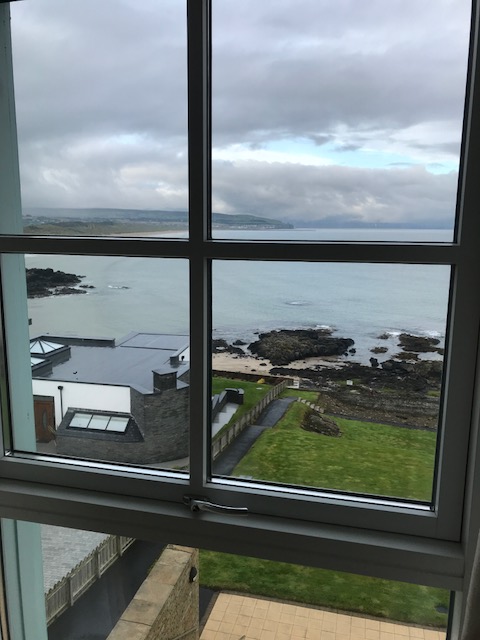 Clamber, Climb and Walk Among Giants

The Giant’s Causeway is steeped in folklore – and it’s impossible to think otherwise, with 40,000 hexagonal basalt rocks jutting out of the ocean like a massive art installation. But this installation is Mother Nature made, is 60 million years old, and unlike anywhere on Earth.

The coastline itself is equally spectacular – castles hugging the shoreline, blue water crashing into the base of the cliffs while at the top cattle leisurely graze on emerald green grass pastures with the best views in the word.

They say the view is better from the top, and we did just that, practicing our rock climbing skills at Runkerry under the watchful eye of the team from Climb NI. There’s nothing like an incoming tide to get you scurrying up a slope!

Making a Break for Belfast

At last, Belfast. It was the birthplace of the Titanic, and today the history of the colossal ship can be experienced in the Titanic Experience and nearby Titanic Hotel, located in the aptly named Titanic Quarter.

Drive along the Peace Wall, in reverence to a violent past and the peace of today. Murals flank the entire city, from the open-air pubs of the Cathedral Quarter to the Peace Wall itself. The city is spectacular – from its historical city hall to local jewels like the Merchant Hotel. 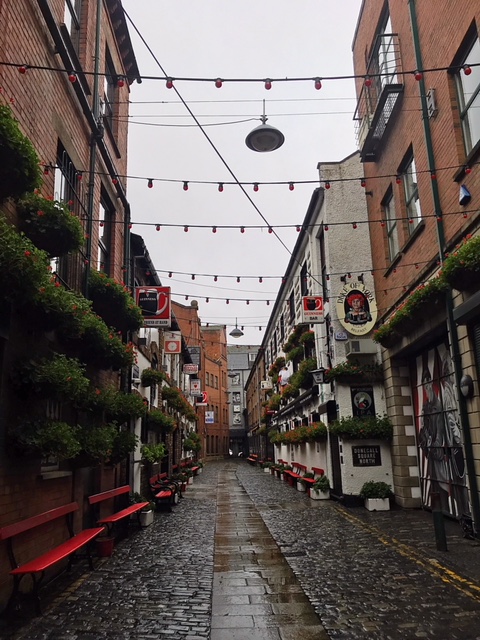 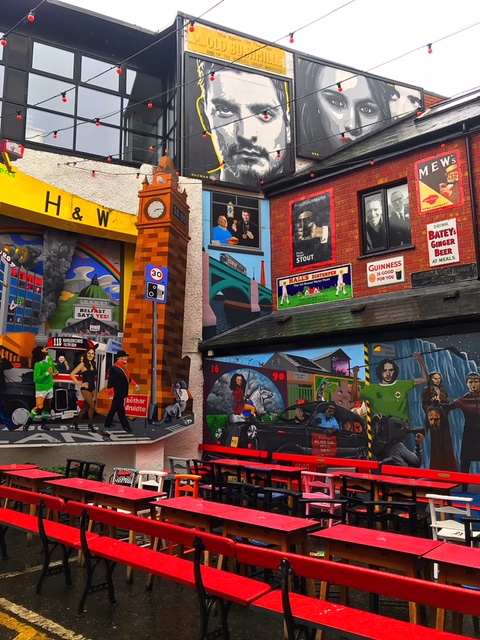 In Ireland, you’ll often hear them say something is “grand” – meaning fine. But the country itself goes far beyond fine.

Hey Ireland, if “grand” is fine, what do you say when something is truly grand? Whatever that is, it’s you. I can’t wait to see you again soon.